I’m just starting to get my head around the concept of Containers and as such decided to take Windows Server 2016 Technical Preview 5 for a spin, which includes Docker Containers as a feature. It’s potentially worth being more explicit here (for anyone not aware) that this isn’t Microsoft’s version of Containers, this is actually Docker baked in to Server 2016. That’s a pretty cool move on Microsoft’s part.

Things were already getting pretty meta in trying to run a Container inside a Virtual Machine on my desktop, but an early challenge I experienced in testing this out was getting the Hyper-V feature to install within a VM running under VirtualBox. The short answer seems to be you can’t, due to a lack of support for Nested Virtualisation despite someone asking for the feature seven years ago. 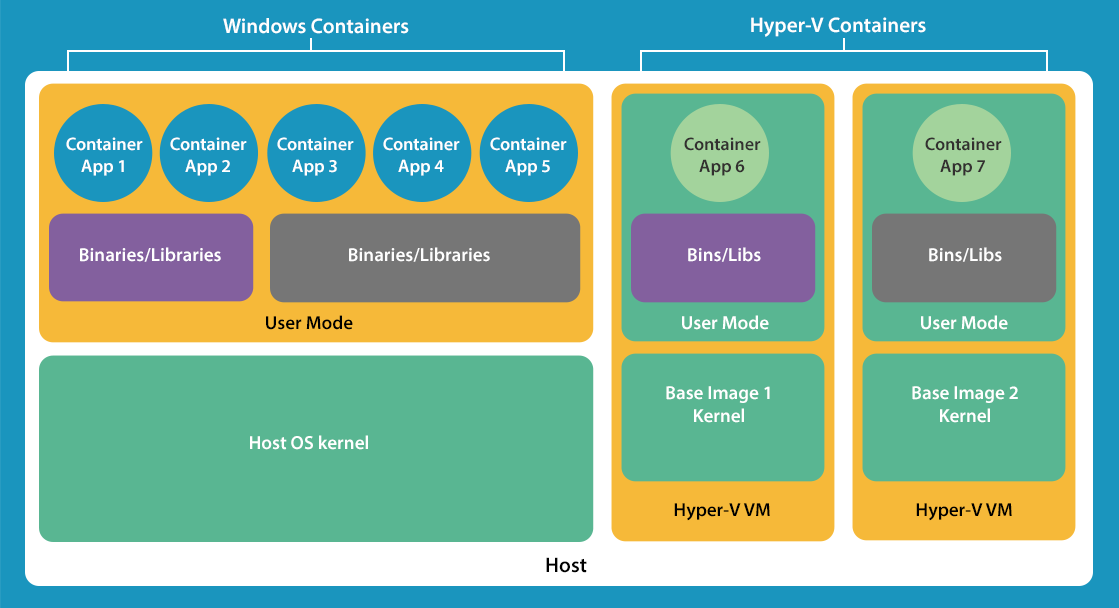 – In summary, a Hyper-V container is more isolated. Containers are like living in a gated community, but a Hyper-V Container also lives in a cave in the woods.

As I’ve noted previously, I suspect the Hyper-V feature on Windows 8/10 may support nested virtualisation, but as i’m currently driving Windows 7 that wasn’t an option for me, so instead I set up my Virtual Machine using VMWare Workstation 12 Player.

If you haven’t yet installed Windows Server 2016 see my previous post on how I went about it and this post for a little more detail on basic setup if you want to use Server Core.

Either way (to core or not to core) the next steps are as follows:

– The steps i’m about to describe are also covered in the MSDN Windows Containers Quick Start guide and I strongly advise you check there first to ensure you have the latest information.

1. Configure your server to be a Container Host

There’s a little more to doing this than just installing the Containers feature surprisingly (although that is the first step). However Microsoft have made this very easy by providing a Powershell script that does all the work (yay automation!) per Step 2 of the Quick Start guide.

Log in to your machine and run Powershell. We’re going to deploy to an existing system, so we should use the “Existing System” part of the guide. First you can download the Powershell script by executing this command:

And then this to configure the system to host Hyper-V and Windows Containers:

– If you don’t want to test out Hyper-V containers you can omit the -HyperV switch and I believe it will configure the server for Windows Containers instead.

This installs the required features and performs reboots. It will automatically resume when you login after boot (it sets up a logon task to do so). This takes a short while (depending on your bandwidth) as it downloads a Windows Nano Server image file via OneGet. Here’s what it looks like while it’s downloading:

When it’s done the script will retun “Script complete!” as well as list the available Docker images (which you can get at any time with docker images). If you’re testing out Hyper-V containers you should see a ‘nanoserver’ image with a a tag of latest:

If you’re testing Windows Containers, it will have downloaded you a ‘windowsservercore’ image instead. 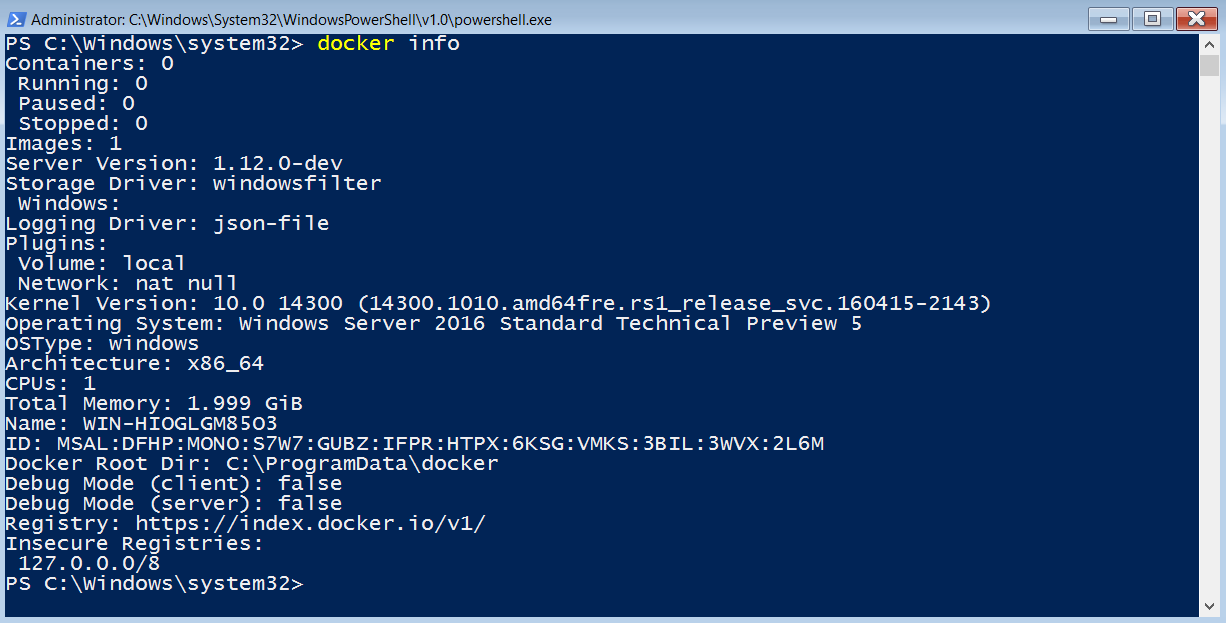 To see what else you can do with Docker type Docker --help.

If you’ve configured your Container Host to run Hyper-V containers, you should now move to part 4 of the Quick Start guide (part 3 covers Windows Containers). Again I will summarise the steps, but I recommend checking the guide directly for the latest info.

– This is particularly relevant advice, because this documentation is open source and in GitHub where anyone can submit improvements, so it’s likely to see regular improvements.

Create a directory named c:\share\en-us. If you’re working in Server Core you can do this with Powershell by executing:

“Hyper-V containers use the Nano Server base OS image. Because Nano Server is light weight operating system and does not include the IIS package, this needs to be obtained in order to complete this exercise. This can be found on the Window Server 2016 technical preview media under the NanoServer\Packages directory.”

Ensure you have the Server 2016 TP5 ISO media still mounted to a CD Drive as D:\. Then copy the IIS package files to your container host by executing:

Create a file in the c:\share folder named unattend.xml and copy the following text into the unattend.xml file:

– Even in Server Core you can do this by just running notepad.

Per the quickstart guide:

“To create a Hyper-V container using docker, specify the –isolation=hyperv parameter. This example mounts the c:\share directory from the host, to the c:\iisinstall directory of the container, and then creates an interactive shell session with the container.”

If you get an error similar to the below, you may need to ensure your host Virtual Machine has at least 2 CPU cores:

If it doesn’t have at least 2 cores, edit the VM to increase the cores and reboot. After rebooting, you then need to delete your container with docker rm iisnanobase before rerunning the docker run command above.

If you’re using Hyper-V under Windows 10 and get this error, you may be running a Build of Windows 10 that does not support Nested Virtualisation.

Error response from daemon: HCSShim::CreateComputeSystem failed in Win32: Not enough storage is available to complete this operation. (0xe)

Use winver to check if you have Build 10565 or later. If you don’t, update via Windows Update.

If you now find yourself in a cmd prompt and hostname returns minwinpc, congratulations, you’re officially inside a running container!

The quick start guide next takes you through configuring IIS within your nano server. This is done by accessing the share we mounted when we ran the container. Execute the following commands: 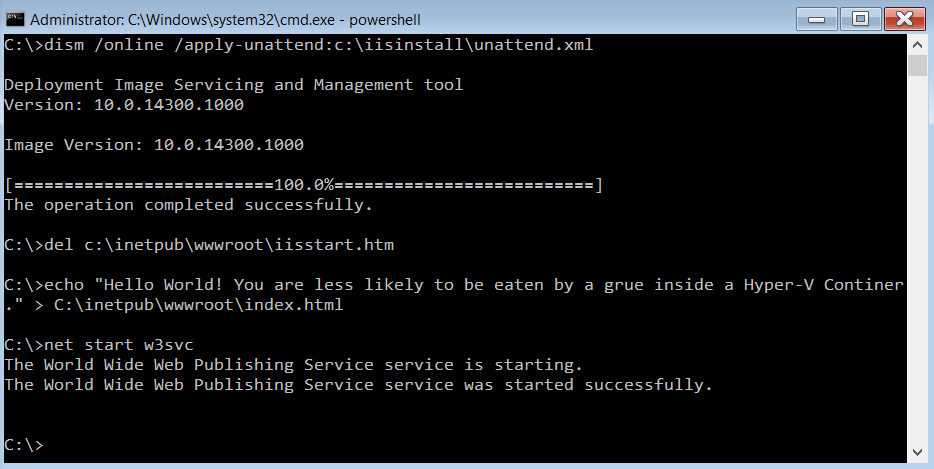 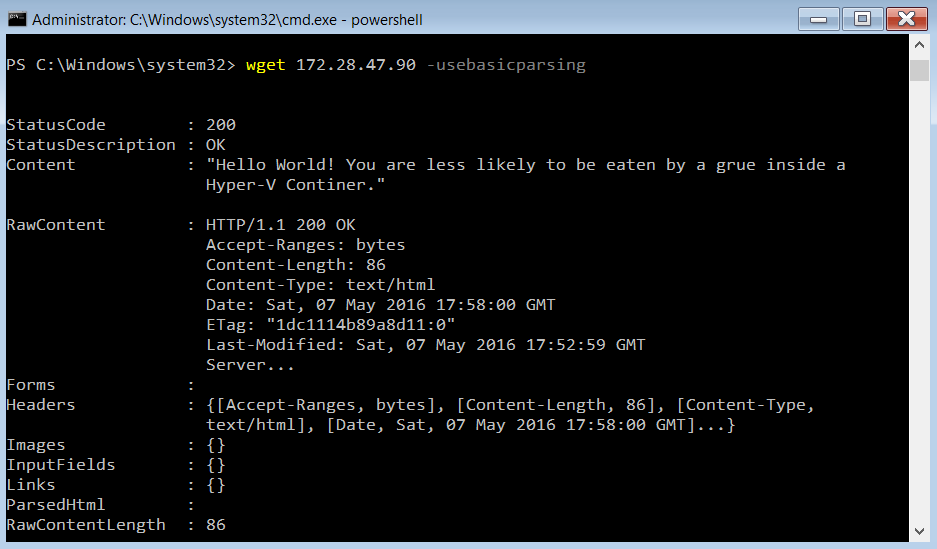 5. Commit your configured container to the local repository

You can now commit your configured container to the local image repository, so that each time you want to start it it’s preconfigured in this way. Before you can do this the container needs to be in a stopped state.

Enter exit in the cmd shell of your running container. This will return it to a stopped state, as you can see by entering docker info.

Following this you can commit the container to the image repository by entering:

You can see your committed container is in the repository by entering:

– I had an issue getting this to work until I rebooted. Its not clear whether this was an issue with my virtual environment or a bug in TP5.

You can see your running containers with docker ps (include the -a switch to see all containers, including those not running).