This post details how PowerShell can be used to run a custom Slack Bot that utilises the Slack RTM (Real Time Messaging) API.

Following on from my previous post where I set up a Slack Slash Command using Azure Functions, I wanted to provide more functionality to my team via a single multi function Slack Bot. Slack has three APIs: The Web API, The Events API and the RTM API. There are lots of community frameworks for working with the Slack APIs in a variety of languages, but for PowerShell existing options seemed to be limited to the Web API.

The full code for this project can be found here in GitHub where I warmly welcome contributions. To learn more about the how and the why, read on below.

Why use the RTM API?

I actually got a workable solution implemented with the Web API, but it felt a little like bastardisation when using it to author a bot. I used the PSSlack module by Warren F to repeatedly read the message history of a slack Channel, monitoring for messages directed to the name of my bot and responding when appropriate. This was fine to a point, but apart from feeling like a misuse of the API it also had a few limitations:

The RTM API allows a bot to establish a websocket connection to the Slack API through which it receives an ongoing stream of messages that it is privy to (just like any other user does via whatever Slack client they use). The Bot connects and sees chat messages for channels it is present in, messages sent to it directly, user presence changes etc. 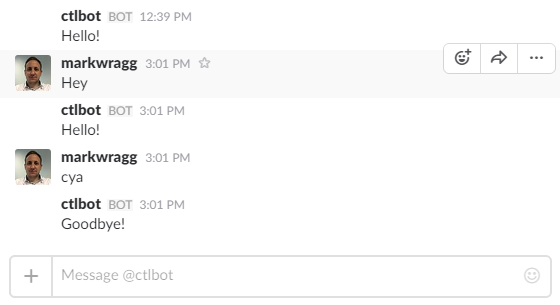 I would not have figured out how to do this had I not come across this code by brianddk which demonstrated the exact .NET concepts I needed within a PowerShell script, albeit for a different purpose.

If you haven’t already, you first need to log in to your Slack account and create a Bot under Custom Integrations > Bots. You then need the API token of your Bot, which I’ve elected to store in an XML file via Export-Clixml so that it’s not hard coded in my script and instead read from a file:

As detailed in the RTM API Documentation, the script first makes a Web API call to the rtm.start method with the Bot’s token:

If this call is successful, $RTMSession will contain various properties that you might also find useful, including details of the Bot users name, ID, preferences, a list of channels, groups etc.

$RTMSession then has a .URL property which is the WebSocket URL needed to connect to the RTM API using the ClientWebSocket .NET class.

I have encapsulated the rest of the code in a Try block, because I wanted to make sure that the WebSocket was properly closed whenever I quit the script. This does happen automatically when the PowerShell process ends, but if you’re repeatedly stopping and starting the the script within a single PowerShell window (or the ISE) it doesn’t, so by using Try I could put clean up code in a Finally block which is executed when you quit the script with CTRL+C.

The above establishes the connection to the websocket. This is encapsulated in a Do loop, because one of the messages sent through the RTM API is a “reconnect_url” event, which gives us a new websocket URL to connect to every 30 seconds. This isn’t necessarily used (the websocket connection should stay alive as long as we need it) but it gives a fallback way to reconnect should the connection drop, without having to recall the rtm.start method.

If we have a successful connection to the websocket, we next read the current message through it using the ReceiveAsync method of the .NET class in to $RTM as JSON.

If we have received a message, we convert it from JSON and handle it:

In the above we look for messages that were either in a Direct Message channel (e.g from any user, privately to the Bot user) or were in any public Channel that the Bot has been invited to and where the message includes @botname (where the name of the Bot was determined when we invoked the rtm.start method).

If either of these are true, then a Switch statement looks for opportunities to respond (see below for the Send-SlackMsg function). This is obviously where you extend the Bot with the responses and functionality that you want it to perform.

Here we could also add Switch logic to handle other types of messages, e.g if we wanted the Bot to take some action for any of the other RTM Events. 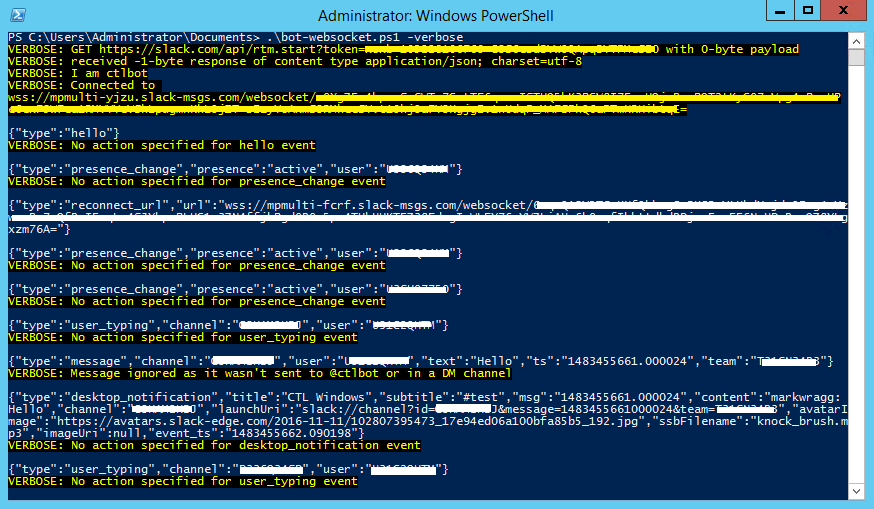 The code loops continuously, reading messages from the websocket instantly whenever they are available, until the scripts execution is forcibly stopped:

In lieu of any other activity, you’ll see the Bot receive a “reconnect_url” event every 30 seconds, which I suspect also serves to keep the connection alive.

This function uses the established websocket to send simple slack messages back to any Channel specified (including Direct Message channels) so that we can respond to messages:

As noted earlier, we can only reply with the simple message format in this way. To use any other message formatting type (e.g attachments) you’ll need to fall back to the Web API.

My basic Bot doesn’t make use of the below function (which I did not write), but I wanted to share it as it is useful if you want to convert the timestamp (TS) properties you get with some of the Slack events in to a PowerShell DateTime object.

This function is also in the PSSlack module where it’s credited as being from Powershell.com.

This project is in Github as Powershell-SlackBot and I welcome pull requests or suggestions to help improve it. It is now also listed on the Slack Community page under Powershell.