This blog post details a PowerShell Core compatible cmdlet that I have authored named Copy-FileHash that you can use to copy modified files from one path tree to another. The cmdlet determines which files have different contents by calculating their hash values through the Get-FileHash cmdlet. This might be useful if you need to copy just files that have been modified between two paths and aren’t able to rely on the modified date of those files to determine which have changed.

What is a hash value?

If you want to go directly to the code, you can find it in GitHub here, or you can install it from the PowerShell Gallery by executing:

You can then use:

For full details on how the cmdlet works.

Copy-FileHash requires Windows PowerShell version 4 or above, or PowerShell Core version 6 or above (through which the cmdlet should work on MacOS, Ubuntu or Windows).

Here is an example of Copy-FileHash in action: 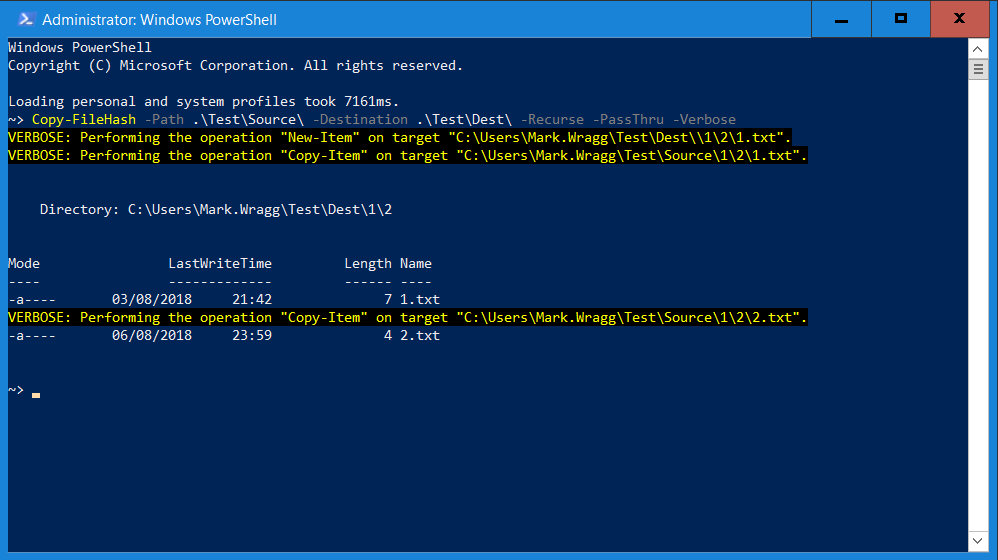 In the above example 1.txt was in the source path but not in the destination path so was created and then copied, 2.txt was found to be different in the source path and so was overwritten. The file objects for the resultant modified files were returned because -PassThru was used.

I recently had a situation where I needed to be able to deploy only changed files from a set of files. Those files had been put in to a .zip package, created from a git-based Source Control and ultimately deployed to a server via Octopus Deploy. It’s a built-in and necessary behaviour of Git to change the modified date of files as it manages them. As a result, I couldn’t rely on comparing the modified date of the files to know which had changed (as in general, it would behave as if all the files were newer) but I knew that the source control versions were canonical, so if any of the files in source were different to the files on the server, the source control version should be used.

Since version 4, PowerShell has had a standard cmdlet for generating a hash value for a file, called Get-FileHash. The cmdlet was introduced primarily to help with Desired State Configuration (DSC). A Pull Server implementation of DSC will hash the configurations to determine if a change has occurred and then apply it. Per the above, as long as you’re using a secure algorithm you can safely assume that if two files calculate different hash values they are different versions of the same file.

My cmdlet is relatively simple, but it has a couple of helpful features that my scenario required:

How does it work?

Here’s a breakdown of the code:

This initial stage handles whether the user has elected to use the LiteralPath or Path parameters.

-LiteralPath is a standard parameter on a number of the built-in file handling cmdlets. By default -Path will interpret certain special characters as wildcard or other operators (square brackets for example). If you want to ensure your paths are handled explicitly, you should use the -LiteralPath parameter.

It then uses Resolve-Path to ensure that we have the full real path for both the source and destination paths (this proved to be necessary when Pester testing and using the TestDrive:\ Pester path, which was handled poorly without converting it to it’s actual path in the cmdlet).

If the -Destination path doesn’t exist, it creates it as a folder and warns the user that we’ve done so. It then retrieves all files from the source path, including those in sub-folders if -Recurse has been used.

The second part of the script iterates through each file found in the source path via a ForEach loop. It determines what the equivalent destination path would be for a file by doing a regular expression replace on the source path with the destination path (note that the regex pattern includes the ^ special character that ensures it only does this replace where it occurs from the beginning of the string). We have to use the .NET regex escape method to ensure that characters in the path are not mis-interpreted as regex special characters. This part of the script is also making use of Split-Path and Join-Path to deconstruct and reconstruct the path. By doing so, we allow PowerShell to handle how paths should be constructed and therefore make this cmdlet cross-platform compatible (e.g it will work via PowerShell Core on Ubuntu).

Having got the destination file path, we then check if it exists. If it doesn’t we use New-Item -Force to create it, which has the helpful side-effect of also creating any sub-folders missing in that files path.

Now we use Get-FileHash to get the hash of each file (this is now possible even where the destination file didn’t originally exist as New-Item has created it with a random value – the reason for the random value is so that the file still gets copied in the later step, because if someone has used the scripts -PassThru parameter this then ensures that newly created destination files will also get returned, even where they are empty).

Finally we compare the two hash results and perform a copy where the results differ.

Note that the cmdlet is using SupportsShouldProcess so if you want to see a dry run result before you perform a copy, you can do so via the -WhatIf and all the destructive actions will be listed via verbose statements.

Again, if you would like to try Copy-FileHash out yourself, you can install it from the PowerShell Gallery via:

If you’d like to review the code or you have any ideas for improvements, check out the GitHub repo here.