A PowerShell stopwatch for your Profile.ps1

Boe Prox blogged/tweeted recently about how you can start a stopwatch in PowerShell with one line using the command [System.Diagnostics.Stopwatch]::StartNew(). While there are plenty of other ways to measure time in PowerShell (e.g measure-object, new-timespan), I could see an adhoc stopwatch being useful on occasion. However the raw class name is a bit clunky and forgettable. Therefore as a bit of fun I have created it as a series of functions in my PowerShell Profile.ps1 with friendly names I could call when needed.

– The irony of the fact that I’ve turned his one-liner in to approx. 30 lines of code is not lost on me btw.

In my profile.ps1 I’ve created the following functions:

This starts the stopwatch running and writes to the console a message with the date it started. Note the use of $script scope for my Stopwatch variable, to make it accessible to the other functions. There may be a better/more responsible way to do this.

Now it’s off and running, we obviously need a way to stop it:

This function allows us to continue the stopwatch without resetting its current time value:

And this function allows you to get the current value from the stopwatch without interrupting it:

Although these function names are easier to remember/recall, I still found myself wanting to be able to control it more quickly. As such the last part of my PowerShell Profile creates some short aliases for these new functions:

As an aside I used get-alias to check that these 3 letter aliases were not in use for anything else, which they don’t seem to be currently but beware they could be in the future. 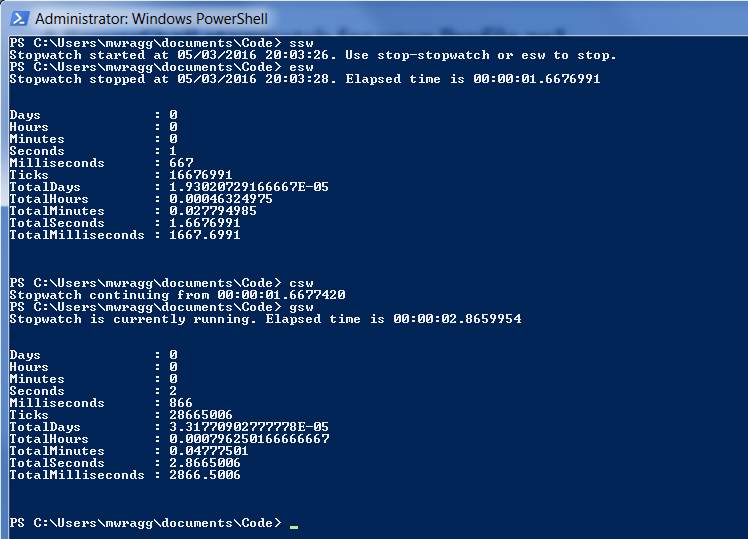