Getting started with Pester (for operational testing)

This is a guide for anyone new to the Pester testing framework module for Powershell who would like to learn how Pester works in order to maintain or create Pester test scripts that are used for operational testing.

Pester is an open source testing framework for Powershell.

Pester provides a framework for running unit tests to execute and validate PowerShell commands from within PowerShell. Pester consists of a simple set of functions that expose a testing domain-specific language (DSL) for isolating, running, evaluating and reporting the results of PowerShell commands.

Why use Pester for operational testing?

While the purpose of Pester is primarily to perform unit testing, I’ve leveraged Pester largely for the alternative purpose of operational and infrastructure testing. Pester is ideal for this purpose because:

If you are running Windows 10 or Windows Server 2016 you already have it installed (congratulations!). You can doublecheck you have it by executing

If not, you simply need to download and load the module as follows:

To create a Pester test, do the following:

Tests are composed of the following constructs:

Here’s a simple example to get you started:

Here’s the result when that is run:

In the output above you can see:

Here’s our example but now including a failing test (true could never be false unless it was opposite day):

Other assertions using “Should” So far in the examples above we’ve performed a simple $true or $false check using “Should Be”. We could also have reversed our logic and stated “Should Not Be” and sometimes it is a good idea to test for both positive and negative scenarios. You can also do other evaluations with Should including:

For a full description of how each of these works, see the official documentation: https://github.com/pester/Pester/wiki/Should

Here’s an example of using “Exist” and “Not Exist” to check two paths. The “Exist” statement performs a test-path, so while we’re piping a string here, the “Exist” test takes that string and uses it with test-path to validate if it returns an object.

Pester scripts are still just Powershell scripts at the end of the day. That means that you can incorporate Powershell anywhere during the script. You might for example have a block of Powershell at the beginning of the script which gathers local settings and configuration that is then used as part of the test evaluations.

But you can also use Powershell syntax such as loops and if blocks (etc.) to make your tests more dynamic.

Here’s an example to test whether today is each day of the week. We could do this by writing seven individual “It” blocks for each weekday, or instead we could use an array and a ForEach-Object loop like this: 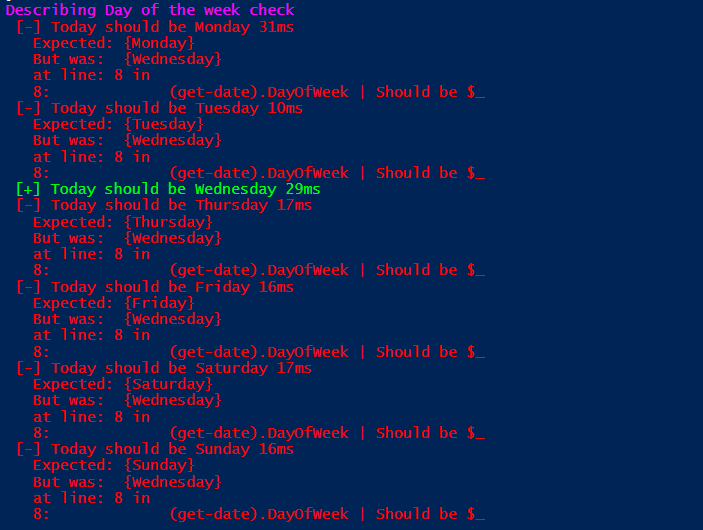 Here’s a similar example which gets every service that is named “Windows” and validates if it is in a Running state:

Per my examples above, Pester scripts can just be run by executing the Powershell scripts in the same way as you would any other.

Alternatively (and preferably) you can use invoke-pester.

Running Invoke-Pester will run any tests named *.tests.ps1 in the current directory (and possibly sub-directories). The tests will run and print their results to the console as above, but you will also get this summary at the end with counts of the test results:

Invoke-Pester has several parameters that are best described in the official documentation here: https://github.com/pester/Pester/wiki/Invoke-Pester

One way in which you might use Invoke-Pester as part of a pipeline would be to use the -PassThru parameter to capture the results as an object.

Here’s an example that runs Pester and returns the results in to $Results:

That object has the following properties:

Which I could use to drive further actions, for example If ($Results.FailedCount -gt 0) { Do some thing }.

The official documentation is likely your best reference for further reading: https://github.com/pester/Pester/wiki/Pester