If you'd like to go directly to the code, you can find it here: https://github.com/markwragg/Terraform-MetricStack

Before we look at the code, it's worth noting the following caveats:

To use my code you then simply need to: 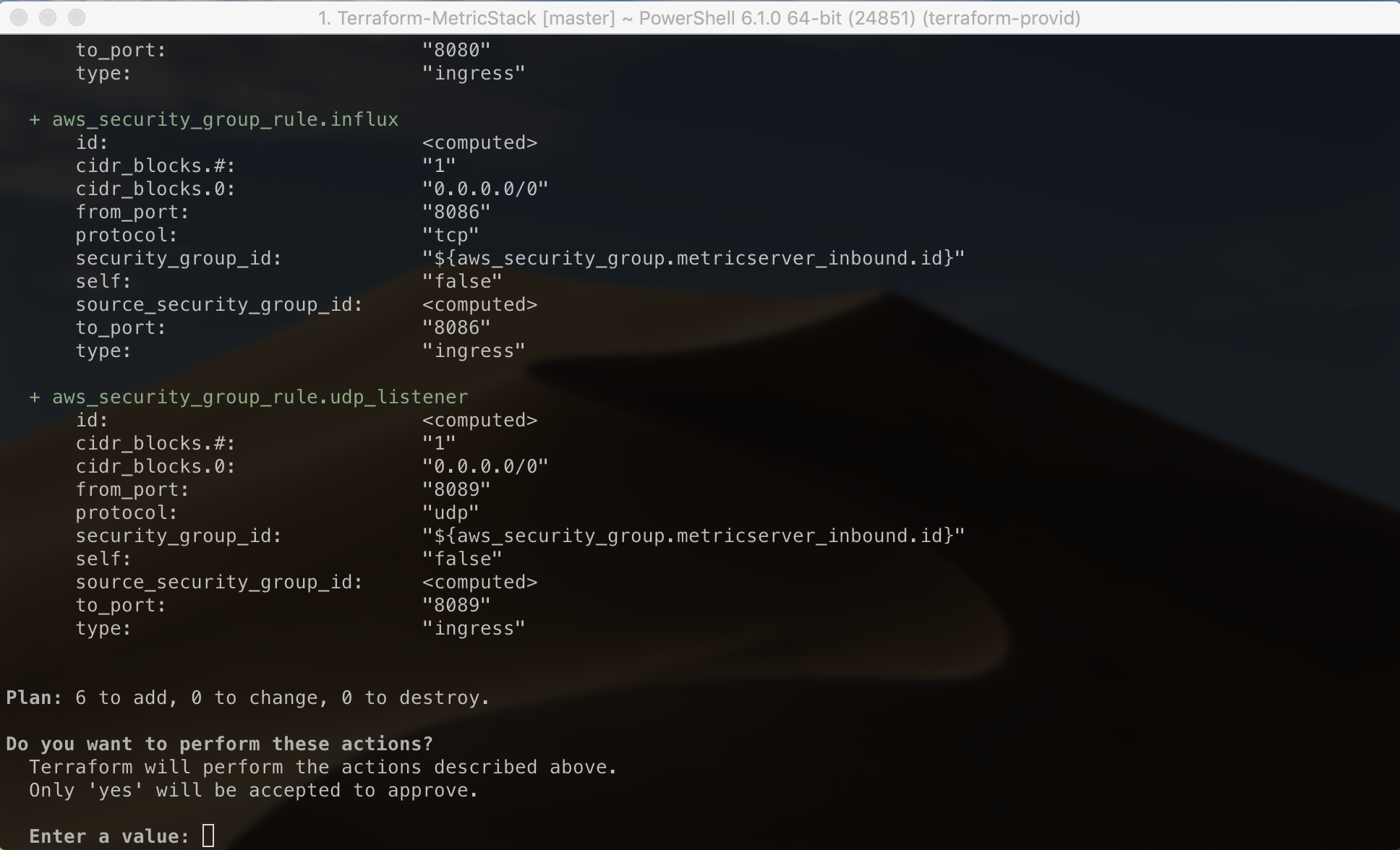 It will likely take just a few minutes to complete the deployment, at the end of which it will output the URL for Grafana and the URL for writing metrics to Influx. However, (because we're using a T2.micro instance by default) you need to wait a bit longer before Grafana and Influx are ready as the server will still be downloading, installing and configuring them. Usually within about 20 minutes the Grafana URL will respond and not long after that Influx should also be working.

Once the Grafana URL is working, you should get to a login page and initial credentials are the defaults (at time of writing admin / admin): 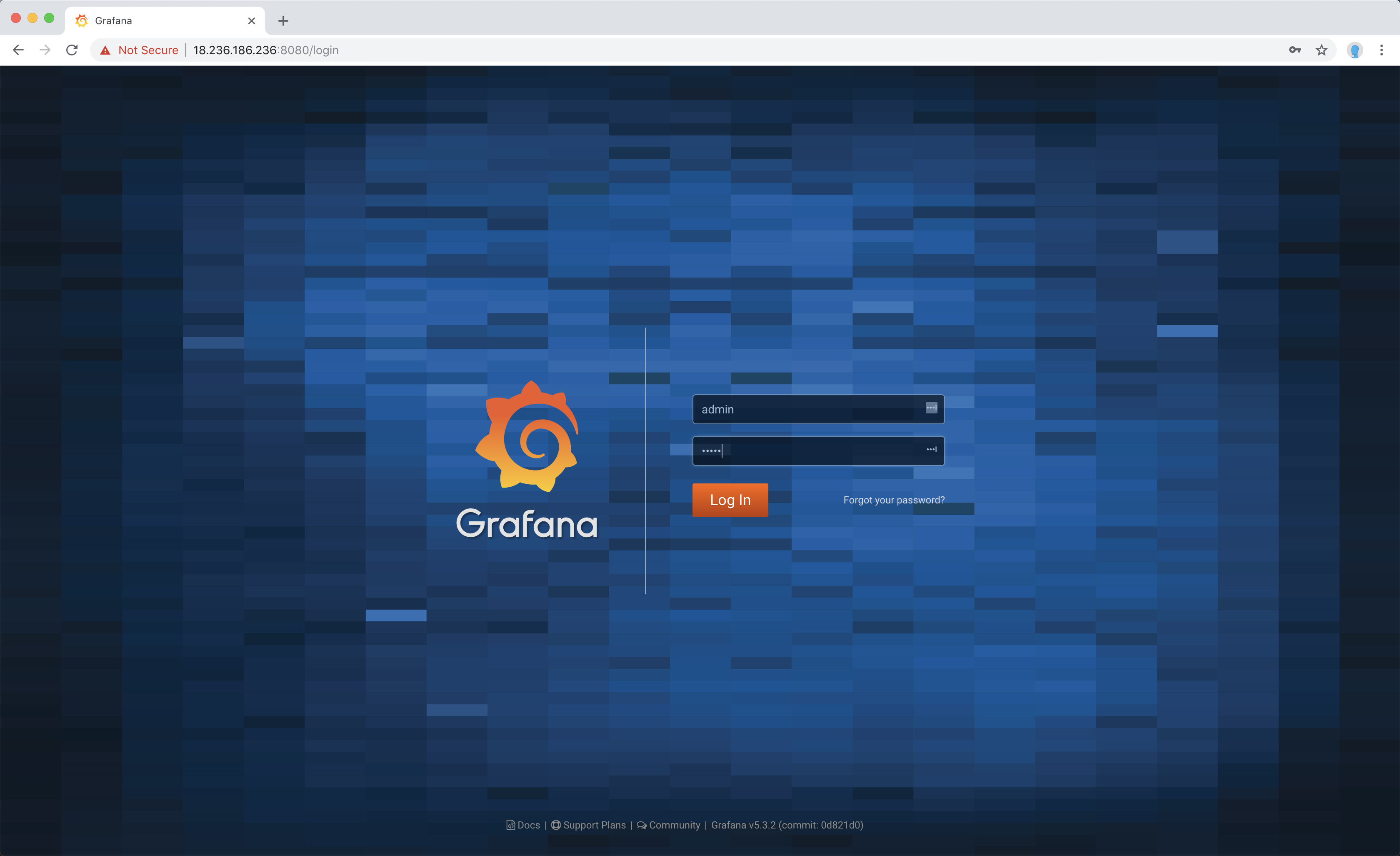 Have a look at my previous blog post for how you can now write some metrics into Influx (using my Influx PowerShell module if you want to) and visualise them with Grafana.

You can skip over the initial parts of the blog post which cover installing Influx and Grafana, as Terraform has just done that for you :).

The main Terraform code lives in main.tf. It starts by defining that we want to use the AWS provider in order to manage AWS resources, and specify the region we want to deploy to via a variable:

Then we define a data source which loads the user_data we need to send to our AWS instance from a separate file. You can define the user_data within the resource directly, but having it in a template file is neater. The user_data is scripts that we want to run on the server after its deployed in order to configure it. There are a number of parts of the script that can be modified via the code's variables (which I'll cover shortly), so to make use of these we need to provide a block of them via vars:

This next data source is used to get the AMI (Amazon Machine Image) ID from AWS. New AMIs are released all the time (with that latest patches etc.) so by using this data source we ensure we are always using the latest one. This data source also makes use of a variable in which we specify a partial AMI name. By default this is Windows 2016 Core:

Now we start to declare our resources. The first is an aws_instance and you can see that it's referencing the data source for it's AMI. We load the instance_type from a variable (T2.micro by default) and then we have the instance associated with a security_group which is defined lower down. Note how the resources don't need to be written in any particular order, Terraform will work out the dependencies itself and deploy things in the correct order:

Next is the aws_security_group resource definition, which is very basic as we're defining the rules as separate resources below it:

And here are the aws_security_group_rule resources. You can see that each is linked to the security group we defined. Some of the ports are also defined via variables (so someone can customise them if they want to) as well as the inbound CIDR blocks, which is ANY/Internet by default but someone might want to restrict access. Note also how some have a count parameter. This allows these rules to be enabled or disabled via one of the variables:

That's all the Terraform code. As mentioned, there are lots of variables in this code and those are all defined in variables.tf. You seemingly don't have to put them in a separate file, but it is a common practice and doing so I think makes it easier for someone using the code to see what they can easily configure. You don't have to reference this file anywhere, when Terraform runs it processes all .tf files in the current directory.

Variables in Terraform can have a default, or they can be defined without any value in which case it will prompt for one when you do terraform apply. Here's my variables.tf file:

It won't have to prompt me for an admin_password, it would use Port 80 for Grafana and it would add a AWS security rule that allows me to RDP to the server (disabled by default).

Note that if you'd already done a deployment with the defaults, then decided to set the above variables via a terraform.tfvars file and ran Terraform Apply, Terraform would make minimal changes to the AWS security group/rules (to enable RDP), but it would also show you that it has to destroy and recreate the AWS instance (it will say "forces new resource") because in order to change the admin password and Grafana port on the server it knows it has to change the user_data which is only applied when the resource is first deployed: 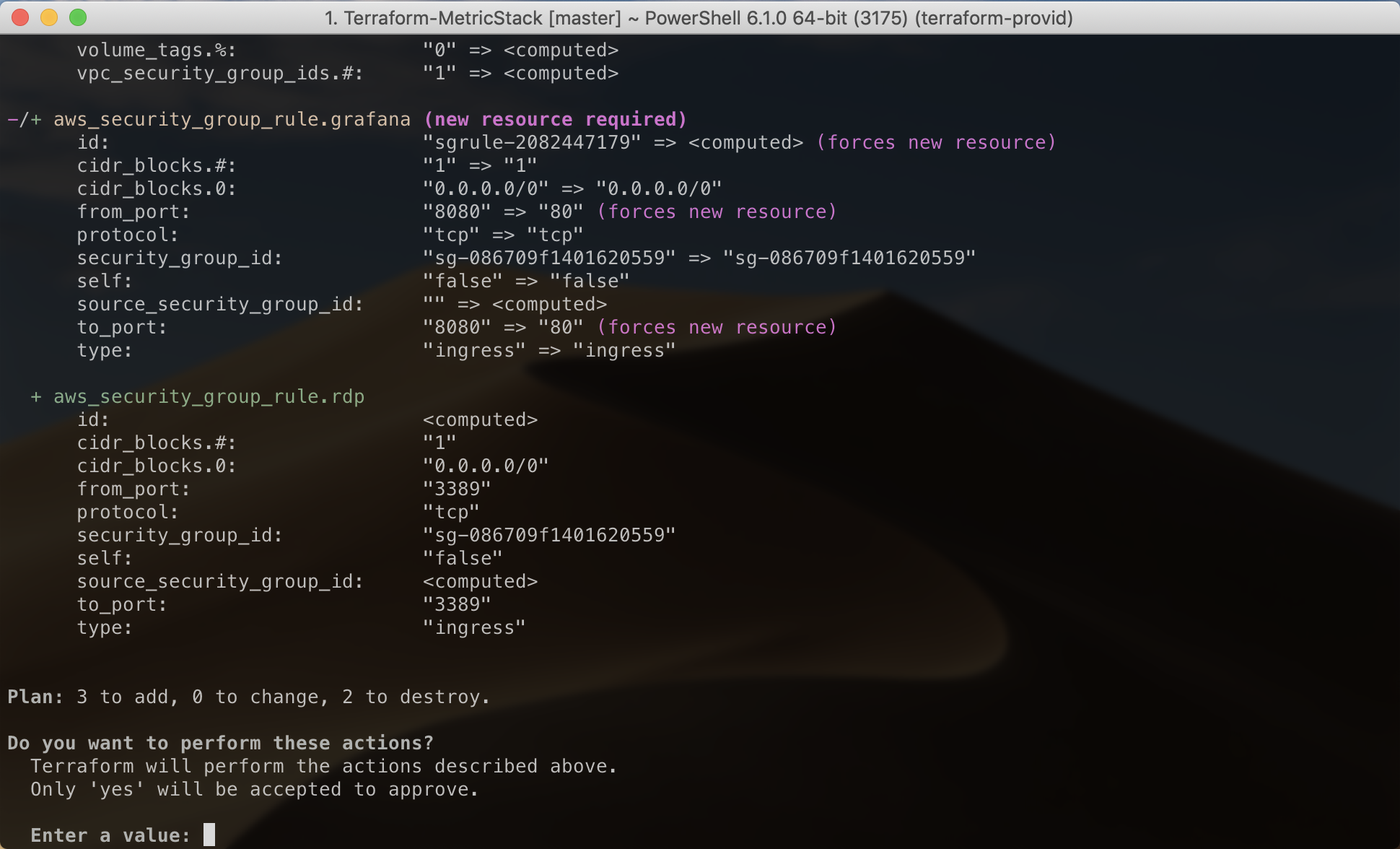 It's for this reason that having a configuration management tool to manage the server settings (the setup of which you could bootstrap via user_data) is often a better option as you can then make application or other host-level config changes without entirely rebuilding the server.

If you make use of a terraform.tfvars file, you might populate it with sensitive settings (like credentials) that you don't want to exist anywhere else but locally. If you check your code into source control, you could use a .gitignore file to ensure files like this aren't committed.

There are other Terraform files that you might not want to bother checking in to source control and you can find a template for a standard .gitignore for Terraform here.

The final terraform file in my code is outputs.tf. This simply defines what values we want to return to the user after they execute Terraform Apply and is how we output the Grafana and Influx URLs. You can see how those are built from multiple variables, so if the user overrides things like the default ports, the output will still be correct. Its also getting the Public IP from the AWS Instance, which means we can discover this without having to go into the AWS console to find it:

The only other file that makes up this solution is the metricserver.tpl file that contains the user_data script executed when the instance is first deployed. I won't cover this in detail but you can view it here. It does the following:

For me, this has been an interesting and illuminating first attempt at Terraform. I personally quite like the way the code is structured and it's not too difficult to read a .tf file and understand what infrastructure is being defined. By using variables you can make it easier for others to set or override default settings which makes the code more reusable. However, there are some interesting complexities (for example: making some of the security group rules optional based on boolean variables took a while to figure out as there's no way to do it if you define the rules within the security group resource vs as separate resources).

Terraform is still undergoing a lot of change and it's intentionally not reached version 1.0 yet. While you can find a lot of guidance online, because of the rate of change it does tend to go out of date quickly. Overall though I think Terraform is a valuable and impressive tool and I'm looking forward to doing more with it.

Last week I spent a day troubleshooting an ARM (Azure Resource Manager) template deployment error that was frustratingly vague. A Load Balancer resource in the template was returning a result of "conflict" and the following error: Note: I've blanked out…

This blog post details a PowerShell Core compatible cmdlet that I have authored named Copy-FileHash that you can use to copy modified files from one path tree to another. The cmdlet determines which files have different contents by calculating their…